In some Japanese gardens, we can find something to be delicately devised. Let's think about the garden in Byodoin temple. As I talked before, the people in those days were eager to realize the pure land in Paradise here in Uji. That is why you can see phoenix hall in the west. When you see the hall from across the pond, the face of Amida Buddha can be seen just through the round window of the hall. When you stand in the hall, look up the corner of the ceiling. The wavy light there is something like the one in the heaven. Yes. But how does it waver like that ?
Look at the left corner of the pond! It is just behind the edge of the hall. Did you notice that there is a little fountain at this point of the pond? Water springs little by little, which ruffles the water surface. The water surface reflects the sun light and it gives an irregular pattern of shimmering light to the ceiling and the wall. In the old days, they felt as if they were in pure land in Paradise when they saw it. 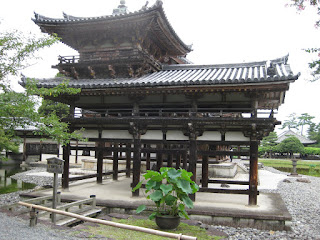 To tell the truth, when I stood in the hall, the hall itself was actually very old and I couldn't feel I was in pure land. But the time when it was built, the color of the building was so vivid and colorful that it was totally different from what it is today.

Amida Buddha is said to come with an orchestra so that the dead won't have a fear at the moment of the death and take them to the heaven. The Amida Buddha is right in the center of the hall.
Thinking of the people and the hall in the old days, it makes me a little romantic.

Now Byodoin temple is under repair. The repair is scheduled to be completed in March, 2014
投稿者 kyotoprivateguides 時刻: 21:34